Walt Williamson opened the Wagon Wheel as a gas station and hamburger stand in 1936.  The resort evolved and eventually sprawled across 314 acres, with an air strip, golf course, swimming…

In 1964 Mr. Williamson built the Church by the Side of the Road in honor of his mother.  It quickly became a popular spot for weddings.

One of the best known figures associated with the Wagon Wheel Resort was Janet Lynn the 1972 Olympic Bronze Medal winning skater who trained at the Ice Palace under the direction of her coach Slavka Kahout.

In 1975 Mr. Williamson passed away and the resort was purchased by the owner of Pheasant Run, St. Charles, IL.  In 1989, after some years of neglect and declining popularity, the resort was closed.

Portions of the resort continue under new ownership.  The Church by the Side of the Road, the Old Stone School (pre-school) and the Red Barn Golf Course are the only reminders of what was once the premier Rockton attraction.

Many artifacts from the resort along with booklets full of pictures and copies of news articles about the Wagon Wheel Resort make up the museum’s collection. 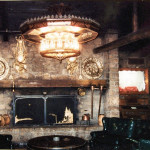 The Early Settlers wing houses items from the Stephen Mack family (Stephen Mack was the first white settler in the area), the Farm Room with early tools and equipment, a Military…

Interesting items found in the Farm Room include a harness horse from the BB Hill Harness Shop circa 1872, a H. A. Webber Angle Sieve Separator (fanning mill) manufactured in Rockton in the mid 1800s and a set of wood moulding planes used by Frank Packard, architect and builder of many of the fine homes and businesses in the Rockton area in the 1800s.

A focal point of the military display is a collection covering the career of Civil War General Elon Farnsworth who was commissioned a Brigadier General in the Union Army at the age of 25.  He was killed in battle in 1863 at Gettysburg and is buried in the Rockton Township Cemetery.

Military uniforms and various documents are on display there, including a certificate awarded to O. E. Loomis by the French government in appreciation for his service as an ambulance driver during WWI.

The early settler bedroom features a Crazy Quilt made in 1888 by Adaline Talcott Emerson, daughter of Wait Talcott, one of the founding citizens of Rockton. 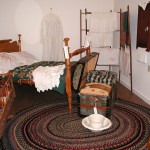 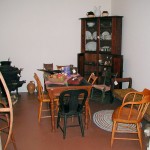 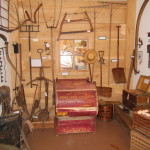 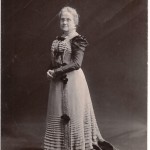