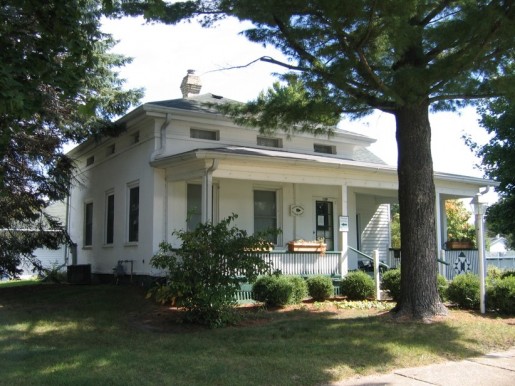 Around 1850 Lucius Fassett constructed this home using the method known as “grout”.  A mixture of mortar and pebbles was poured in forms, layer by layer, and then plastered and…

…scored to mimic the look of limestone blocks.  The home is furnished in period style and includes a parlor, dining room, bedroom, children’s room, sewing room and an “updated” kitchen from the early 1900s.The “updated” kitchen features a cast iron wall hung sink with built-in drainboard, a porcelain top cabinet, an enameled yellow and green gas stove and a 1936 refrigerator with the motor mounted on top and a tiny freezer compartment.  An oak wall telephone would have been in use until the 1950s when the rotary dial phone was introduced in the area. 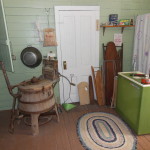 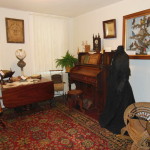 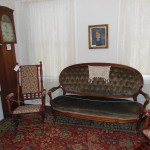 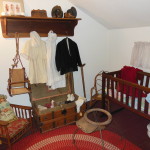 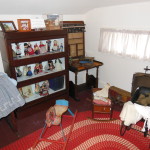 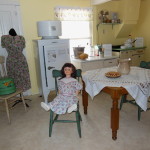 A prominent feature of the house Dining Room is a large Eastlake style cabinet which was a gift from Bio DeCasseres, granddaughter of Stephen Mack and Hononegah.  Another item of…

…interest is the convertible high chair/stroller The rolltop desk was used by early settler and one time Village President Albert Hulett.  Prior to living in Rockton he farmed in Owen Township where he was the town supervisor.  His niece Alta Hulett is known for being the first woman in the state of Illinois to be admitted to the bar and the youngest woman ever to become a lawyer.  In the 1870s she was responsible for drafting pioneering legislation prohibiting discrimination against women in the workplace.  She was born in Rockton township in 1854 and died in 1877 in California where she had moved in the hope the climate would help cure her tuberculosis. 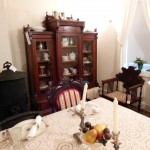 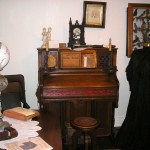 Two sewing machines, a Singer Mfg. Co. model from the late 1870s and an unusual model made by “Elias Howe Jr., Inventor and Maker, New York USA” are features of the…

…Sewing Room.  Sewing notions and a sample of counted crossstitch on perforated paper are displayed along with a battenberg lace collar pattern.

Your Content Here…
The bedroom furniture is a walnut Victorian style with carved details.  Wedding dresses from 1880, 1895 and 1929 are on display.  The wedding dress of Miss Caroline Packard which she made for her marriage to Calender Jessup in 1881 is on the dress form. Several quilts, including signature quilts, often made as Bride’s Quilts,  are in this room. 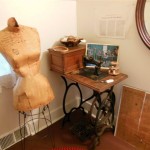 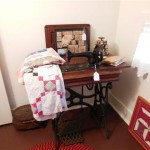